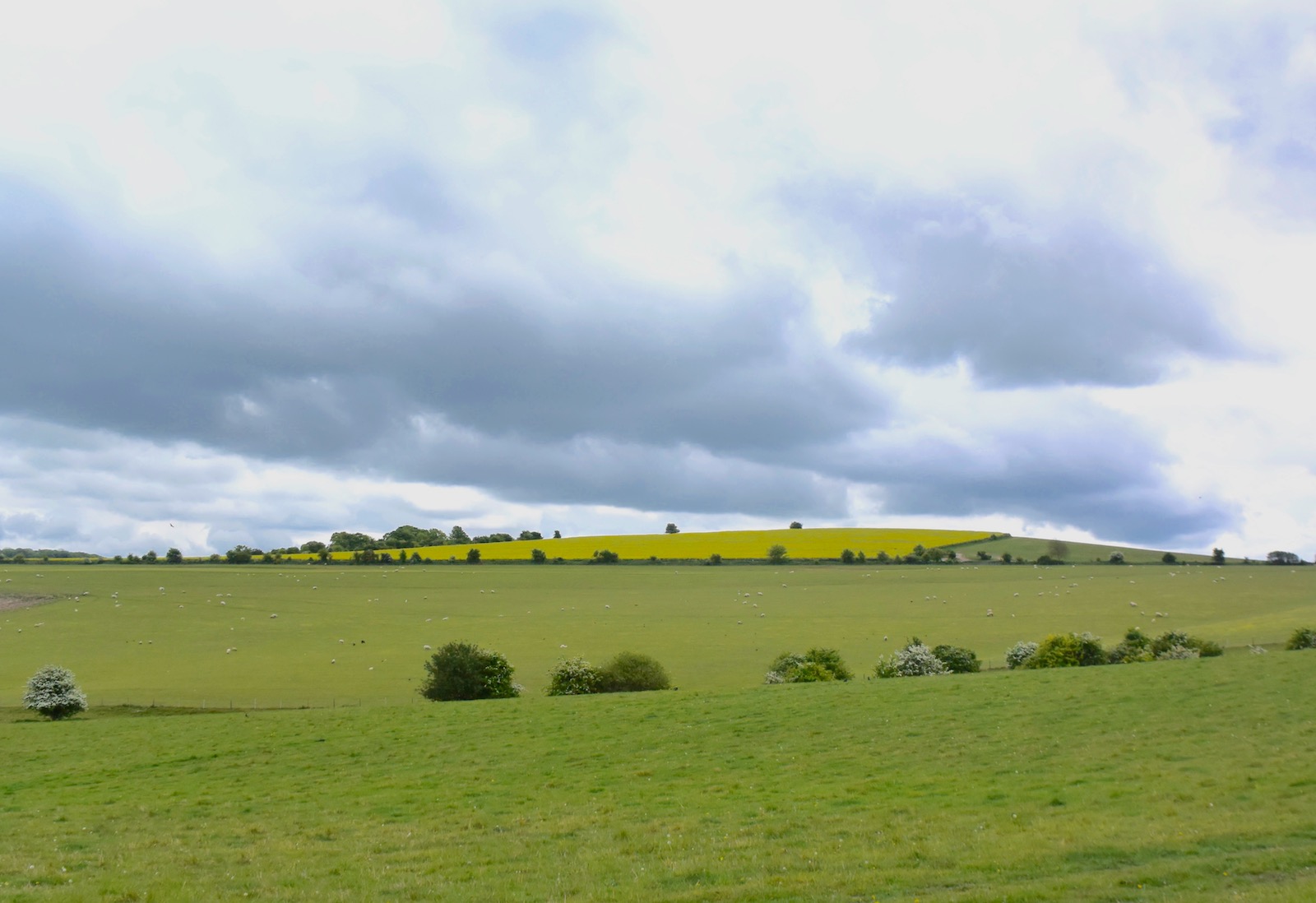 This post is adapted from my book, King Alfred: A Man on the Move, available from Amazon. It would be great if you could support this project by purchasing a copy.

This battle against the Vikings  took place in 871AD just four days after the battle at Reading, and while Alfred’s elder brother Æthelred was still king. This battle was an important victory for King Æthelred and Alfred, sandwiched between the two losses at Reading and Basing.

Potential locations for this battle can be divided into two areas. Firstly, the more western sites  around White Horse Hill in Oxfordshire, and secondly, about twenty miles to the east, sites on the Downs near Moulsford and Streatley, mainly in Oxfordshire but close to the modern boundary with Berkshire to the south.

This post looks at the second set of sites (click here for part 1). Over the past couple of centuries people have come up with various ideas and because there is no hard evidence it is difficult for anybody to be wrong. However, I think it is still possible to speculate on which sites are perhaps more probable.

A major consideration is the identification of the location of Ashdown itself. In the Old English of the Anglo-Saxon Chronicle  the location of the battle is called æscesdun. This Chronicle also tells us that in 1006, after the time of King Alfred, the Vikings proceeded from Cholsey, now in Oxfordshire, along Æscesdun, to a location known today as Scutchamer Knob, which is about 10 miles west of Cholsey. The general area between these sites may therefore be the æscesdun of 871. In fact, one can wonder whether all of the downs that straddle the current Oxfordshire-Berkshire border were once known as  Æscesdun.

A further consideration is the accessibility of the location for both the Vikings, who appear to have still been based at Reading, and for Alfred and King Æthelred who, four days earlier and after the battle at Reading, had been fleeing east across the river Loddon in the direction of Windsor. Perhaps importantly, the Thames would have allowed easy access by water from Reading to various locations, and an important ancient track called the Ridgeway would have facilitated east-west movements through this area. We also have preserved in the name Moulsford a possible fording point for crossing the Thames.

All this leads me to think that the battle possibly took place west of the Thames on the Berkshire/Oxfordshire downs. If you consult an Ordnance Survey map you will see the area that I am suggesting, which extends from Lowbury Hill in the west to Moulsford Bottom in the east. I feel that it is important to point out that other writers have come to similar conclusions.

I find the most tempting location in this area to be Lowbury Hill. Asser records that the Vikings held the higher position, and if you go up Lowbury Hill you will see that it is a site you would want to use. There is good visibility in all directions and it is close to the Ridgeway. One can envisage the Vikings being on this hill and the Saxons coming west along the Ridgeway, having perhaps forded the Thames at Moulsford, and encountering the Vikings who were at the top of the hill. A line drawn between Cholsey and Cuckhamsley Knob lies just north of here (and also Kingstanding Hill), so it seems to be in the general area of Ashdown. There are footpaths and bridleways that cross the downs, the main one of course being the Ridgeway, which will take you close to the hill.

There are two other locations in this area that have been put forward, and both seem plausible. One is Kingstanding Hill. On the Ordnance Survey map you will see a track heading south west near the hill that eventually becomes called The Fair Mile. It was possible to park at the litter-strewn beginning of this track. Views from the track as it ascends are limited by hedgerows, but there are one or two good views north and south.

The other location is Moulsford Bottom. I found the best way of viewing this to be by following the footpath that runs from near Moulsford Pavilion.

While at Moulsford you may wish to appreciate a particularly lovely stretch of the nearby Thames Path. This is the section south of Moulsford, accessed by going down Ferry Lane.  I sat down there on a warm late spring afternoon and watched three hobbys feeding over the water whilst red kites were circling overhead. A lovely spot.

It is interesting to note that an Æscesdun is also mentioned in the Anglo-Saxon Chronicles at 661, although we are not provided with a location.

There is much more about the travels of King Alfred in my book, including maps and references. Click or tap the image below to learn more about the book.

This post is adapted from my book, King Alfred: A Man on the Move, available from Amazon. It would be great if you could support this project by purchasing a copy.

This battle against the Vikings  took place in 871AD just four days after the battle at Reading, and while Alfred’s elder brother Æthelred was still king. This battle was an important victory for King Æthelred and Alfred, sandwiched between the two losses at Reading and Basing.

Potential locations for this battle can be divided into two areas. Firstly, the more western sites  around White Horse Hill in Oxfordshire, and secondly, about twenty miles to the east, sites on the Downs near Moulsford and Streatley, mainly in Oxfordshire but close to the modern boundary with Berkshire to the south.

This post looks at the first set of sites. I shall come clean and say that I think the evidence fits better with the second group, which will be the subject of another post.  Look out for Ashdown Part 2!  However, there has been a strong tradition that the battle took place at or near to White Horse Hill, and what better excuse is required to explore this lovely part of England?

I hadn’t been to White Horse Hill for many years. I certainly can’t recall the red kites and ravens that are present there now. It is a beautiful place, but viewing the white horse from the ground isn’t easy. I heard that the best view was from Dragon Hill, but it wasn’t clear from there either. I think our ancestors must have intended it to be best appreciated from the sky.

The large Iron Age Uffington Fort is almost adjacent to the white horse, and, perhaps unsurprisingly, this has been drawn into the tale of the Battle of Ashdown as being the possible Viking base.

The site is clearly significant because of the horse, the fort and the Ridgeway running alongside. A short distance west along the Ridgeway is Wayland’s Smithy, a famous Neolithic long barrow and tomb.

Heading in the other direction along the Ridgeway one comes to Blowingstone Hill.According to legend, Alfred rode up this hill and summoned his men by calling through aperforated sarsen stone that is now known as the Blowing Stone. Almost unbelievably, the reputed Blowing Stone is at the side of the road near a cottage as you drop down into Kingston Lisle.  Leaflets were available, which had the following instruction: “The secret is simply to close the hole completely with the mouth and then blow”

This presented three problems. Firstly, which of the several available holes should I blow in to?  Secondly, hygiene. And thirdly, all of the holes were filled with dead leaves. So I gave it a miss.

A location called Alfred’s Castle is a Bronze Age enclosure near Ashdown House, just south of Ashbury, and in Victorian times was considered a possible location for the Wessex troops prior to the Battle of Ashdown.

However, there is no evidence that the site called Alfred’s Castle was called this prior to the 19th century. I have read that it was previously called Ashbury, with that name apparently later transferred to the nearby village, although I have been unable to prove either of those points. It seems likely that a Latin charter issued in 840 at Southampton by King Alfred’s father Æthelwulf relates to Ashbury (as Aysheburi) and Ashdown (as Aysshedoune). We are not provided with any information as to where these places called Aysheburi and Aysshedoune were, but the Berkshire Ashbury seems likely, based on the details provided in the subsequent charter. There is a clear similarity to Æscesdun (how the site of the battle is named in both the Old English of the Anglo Saxon Chronicles and the Latin of Asser, who also calls it Mons Fraxini, although it seems that this may have just been his direct translation of Æscesdun) but the differences will also be noted. However, that the Aysshe element was mutable to Aesce seems to be supported by a later charter, also issued by Aethelwulf at an unstated location, in 856, where a place named Æscesbyrig seems to be Ashbury, because geographical features are mentioned (actually of the adjacent settlement of Woolstone). This charter is slightly more challenged as to its authenticity, although the information relating to place-names may still be correct.

The granting by King Alfred’s father of land at a place called Aysshedoune certainly raises the prospect of the Battle of Ashdown having been fought in this area. However, places beginning with variants of “Ash” were and still are common. The evidence for the locations I describe in Part 2, where there was an area called Æscesdun, seems to me to be slightly stronger, although I can’t guarantee that I will maintain this position as I continue to look at and review new evidence. Ashdown House is 17th century. It is not possible for me to say whether Ashdown House has drawn its name from local legends (or the truth!) about the Battle of Ashdown or if it has preserved the name of Aysshedoune through some route (see above).

There is much more about the travels of King Alfred in my book, including maps and references. Click or tap on the image below to learn more about the book.